Britain’s businesses stand accused of allowing the UK to become a low-wage, low-skilled and low-productivity economy bedevilled by slow growth.

The prime minister criticised company bosses for wanting to import cheap workers to fill vacancies rather than improve the skills of young people already in the UK. Only a more skilled workforce could command higher wages and better living standards, Boris Johnson said.

“Yes it will take time and yes it will sometimes be difficult but that was the change that people voted for in 2016,” he added.

Business leaders have hit back, accusing the government of ignoring the fallout from the Brexit deal and Covid-related hold-ups in vital goods and components that could threaten empty shelves in the run-up to Christmas.

Does the UK have a wage problem?

Before the 2008 financial crisis, wage settlements averaged 3-3.5% while inflation remained well anchored around the 2% target set by the Bank of England. The result was a consistent, if small, increase in living standards for the average worker. A slump in wages during the 2009 recession and lacklustre rises since 2010 of around 2-2.5% meant it took until 2018 for workers’ real wages to catch up with the levels before the 2008 crash. 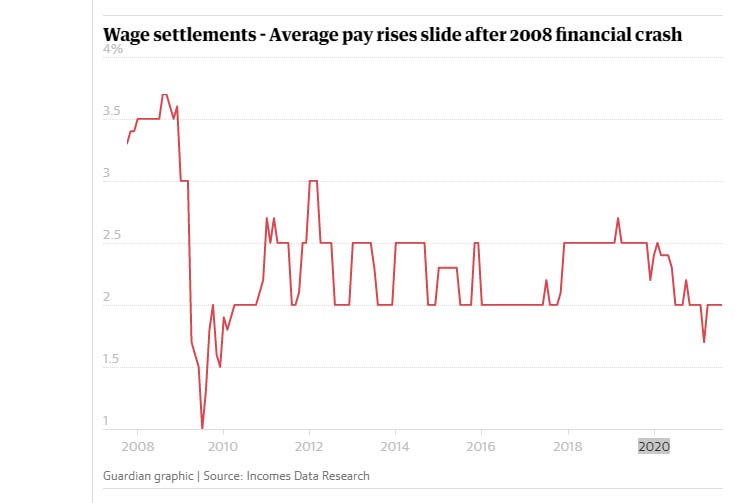 Was pay depressed by immigration?

Brexit supporters argued that a key reason for depressed wage rises over the past 10 years was unfettered immigration, mainly caused by membership of the EU’s single market. However, there is no academic support for this argument. While there were large numbers of non-British-born workers in pockets of the labour force in construction and hospitality linked to stagnant wages, evidence showed most migrants joined expanding industries that would have remained smaller without them.

Economic trends and government policies were considered to have a greater effect. For instance, the digital revolution since 2000 has automated millions of tasks carried out by office workers and limited their power to bid up wages. Likewise, stricter employment rules enacted by David Cameron’s administration undermined the ability of workers to take industrial action in support of higher wages.

Will wages rise if we limit the number of migrant workers?

But as Tony Danker, the director-general of the CBI, asked in response to Johnson’s speech, where would the money come from for all this extra investment? He said: “Ambition on wages without action on investment and productivity is ultimately just a pathway for higher prices.”

Are all industries able to increase wages?

While a farmer could increase the wages of agricultural machinery operators with the money saved from dispensing with crop pickers, not all industries can improve wages without passing on the cost to customers. The care industry is a case in point. Johnson said private firms could be more closely integrated into the NHS’s computer systems, saving money. But the biggest cost in the care industry is wages. With most firms looking after disabled and elderly people in a care setting already operating on wafer-thin profits margins, a rise in care bill is inevitable, pushing up

Can staff shortages be overcome by retraining people on furlough?

About 1 million people were on furlough when the scheme ended on 30 September. If they cannot find another job in their industry, many of them are likely to retrain in another industry. However, business groups say that dynamic is unlikely to fill shortages occurring now, and over the longer term restaurants will struggle to fill the vacancies for chefs, and the number of care nurses will remain the same for several years, even should there be higher wages and better terms of employment on offer.

The boss of the retail chain Next, Simon Wolfson, said some industries were in a position to cope with the supply shortages and soaring cost of energy while others were not. Lord Wolfson, a Brexit supporter, said the government should allow firms to attract foreign workers after a surcharge on their employment is applied, meaning they could not undercut domestic workers.

Does the same push for higher wages affect the public sector?

Not according to the government, which has frozen public sector pay beyond the NHS. Mike Clancy, the general secretary of the professional workers’ union, Prospect, said one of the many flaws in the prime minister’s argument was his belief that private sector organisations could afford to pay higher wages but public sectors bodies were too poor to do the same.

“If the government wants private sector firms to raise wages, then it is setting a poor example by freezing the wages of public sector workers. Ending that pay freeze must be the first step towards achieving the high-wage economy that the prime minister says he wants to see,” he said.

Read the full original article by Phillip Inman in the Guardian