The latest increase to the National Living Wage (NLW), announced today as part of the Chancellor’s Spending Review, will see the highest statutory minimum pay rate rise by 19p or 2.2% to £8.91 an hour with effect from April 2021.

This is by far the lowest uplift in the NLW since its introduction in April 2016 – previous increases ranged between 4.1% and 7.5% – and is in line with the latest rise in the recommended voluntary ‘Living Wage’ (also 2.2%, to be implemented by accredited employers by May 2021) and slightly higher than median awards observed as part of IDR’s ongoing monitoring of pay settlements across the economy (although this was higher, at 2.5%, at the time when Commissioners were making their deliberations on this year’s NLW uplift).

One consequence of the coronavirus pandemic has been a reframing of what activities are considered ‘essential’ and many of these are in the low-paying sectors, such as social care or food production. This comparatively low increase, relative to recent years, will therefore affect thousands of people in in these areas who are now regarded as ‘key workers’.

Following an initial four-year period that brought minimum wages for the over-24s to the level of 60% of median earnings, the Government’s current objective for the NLW, confirmed in this spring’s Budget (at a time when the full extent of the potential economic effects of the pandemic was perhaps not yet evident), was for it to reach two-thirds of median earnings by 2024 (subject to sustained economic growth).

Assuming a more stable economic climate, and therefore a smoother trajectory towards this point (most recently estimated at £10.69), such a target would have entailed rises in the NLW of around 5% each year, with the Low Pay Commission originally working towards a figure in the region of £9.21 (representing a 5.6% increase) for 2021. That the latest increase falls considerably short of this target is indicative of the impact the pandemic has had on the economy, especially in many of the low-paying sectors such as hospitality and non-food retail, where most businesses have been shuttered or operating on a much reduced basis during this year’s lockdowns. Many employers in these sectors will welcome this more modest uplift to the statutory minimum in the current challenging trading environment, which our forthcoming report based on 22 case studies in low-paying sectors shows.

Lowering of the age threshold

The April 2021 increase will also see the lowering of the age threshold for the NLW from 25 to 23, as planned. The Government’s intention is that this will ultimately reduce further, to 21, by 2024. Youth rates will also increase in April but by a lower amount than the NLW, with the exception of the apprentice rate, which will rise by 3.6%.

Path for the NLW

The Government's acceptance of the Low Pay Commission's recommendation was closely followed by a summary of findings from the Commission itself, which outlined some of the challenges in reaching this year's recommendations due to covid19, with workplace visits postponed and issues with earnings data, among other items.

The LPC also added: 'Our approach this year is to recommend rates that minimise any ‘significant risk’ to employment prospects, as per our remit. This led us to recommend a 2021 NLW rate of £8.91. This is lower than our best estimate of the on-course rate of £9.06, but is modestly higher than the increase in prices, meaning low-paid workers’ living standards should be protected. For a fuller account of the rationale for our rate recommendations, see our letter of advice to the Government. We have produced an indicative path here, but this is subject to more uncertainty than usual. The fainter lines either side of the main trajectory show how the path would be affected if pay growth differs by 0.5 per cent from the current forecasts. This could move the path by more than 20 pence up or down by 2024. Given uncertainty over the future, we do not recommend a change to the Government’s target of two-thirds of median earnings by 2024. We remain committed to the goal of ending low pay. A fuller review of the path ahead – and greater clarity on a future rate path – will hopefully be possible in our 2021 Report.' 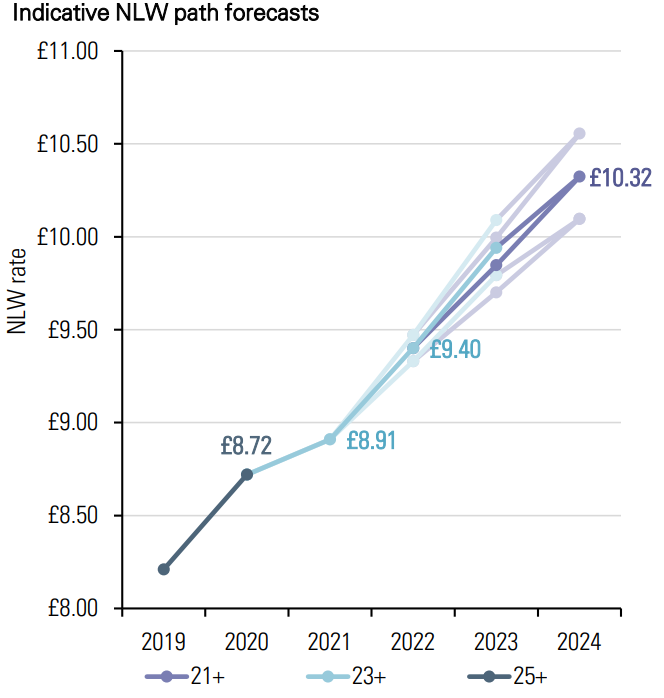 The full report will be launched on 9 December 2020.

Pay and conditions in Road Transport and Distribution research available

Need help with your pay strategy? IDR can help you

OPEN RESEARCH: Be part of the picture on pay and reward