The recent review body awards indicate that the longest period of public sector pay restraint in the history of the UK is almost over. ‘Almost’ because, while the armed forces, police, prison officers and teachers received increases ranging from 2.2% to 3%, some groups – notably the civil service – are still bound by the previous policy maximum of 2%.

And while the Government has complied with nearly all of the review bodies’ recommendations, it rowed back on suggested additional increases of 1% for specialist doctors, arguing that this could still be paid in 2020 as long as these doctors reach a deal with the Government over their contracts. It also rowed back on the recommended additional increase of 0.2% to pay bills for the senior civil service, again for specialist pay. This is an area in which the public sector is facing sharp competition from the private sector, where pay is generally higher.

The civil service, below the level of the mandarins covered by the Senior Salaries Review Body (which also covers the judiciary and senior military), had already had its pay limits set by Treasury fiat, in the form of that body’s annual pay remit guidance. This provided for funding for awards averaging 1%. It also allowed departments the flexibility to spend up to a further 1% on pay awards, ‘provided it is affordable within budgets’. In other words, any extra increases above 1% will not be funded, though departments will be allowed use ‘recyclables’, or the money released by comparatively higher-paid leavers being replaced by lower-paid new starters, to fund pay awards, for the first time in many years.

Arguments over funding, or the potential lack of it, have also arisen in schools, where one of the main teachers’ unions, the National Education Union, has asked the Government whether it will support the 2.75% pay award with additional funding. The union is concerned that unless the rise is fully funded then cuts will have to be made to other areas of schools’ activities in order to afford a pay rise for teachers.

Two things have helped kill off the policy of restraint. One is that the Scottish Government refused to play ball, opting instead last year and this for a higher policy of 3% for all those earnings £36,500 or below. And this year there are Welsh variations too, with a new review body for teachers in the principality. This recommended 2.4% for most teachers but with an increase of 5% to the minimum of the main pay scale. It may have recommended a lower headline rise than the English review body in order to appear responsible, or to balance the higher recommendation for the lowest pay point. In any case, the Welsh education minister is consulting instead on a headline rise of 2.75%, the same as in England, but has accepted that the bottom of the pay structure should be uplifted by 5% to aid recruitment of new teachers.

The other factor in the death of the policy has been its severity. This has played a part in producing significant issues with recruitment, retention and motivation. For example, the Armed Forces Pay Review Body noted the failure to meet recruitment targets, with the lowest ever levels of satisfaction with basic pay. According to the School Teachers’ Review Body, teacher supply continues to deteriorate, especially at secondary level. And there are now significant concerns about retention for teachers in early stages of careers, as well as for experienced teachers. In health the Doctors and Dentists’ Review Body has issues with capacity in the workforce and concerns about recruitment of staff from the EU and beyond. Meanwhile, morale and motivation are the biggest issues for police and prisons. Given the duration and harshness of the policy, these issues are likely to figure in policy for a number of years more. 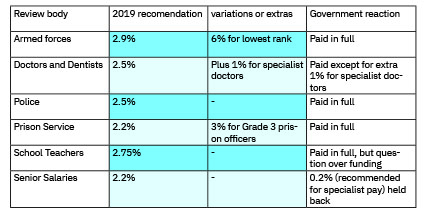