Measures of price inflation (which act as proxies for the cost of living) remain an important input into wage-setting decisions. There is not necessarily one best measure for indicating how inflation might be taking place and the rate at which it might be increasing. Issues include what items to include in the ‘basket’ of goods/services for measurement of changes, and how to calculate the rate of change. We consider each of the official measures in turn below.

CPI – this is the Government’s main measure of inflation for macroeconomic management purposes. Its basket includes a number of items that are excluded from the RPI, for example university accommodation fees and foreign students’ tuition fees; the main omission is housing costs, particularly in the form of mortgage interest payments, but also other items such as council tax; since 2011 it has been used for the uprating of state benefits and pensions; and since 2014 for personal tax allowances and thresholds; it calculates inflation mainly on the basis of the Jevons formula.

CPIH – this is the Office for National Statistics’ headline measure of inflation in its monthly releases on the topic; the ‘H’ stands for housing; it was developed and launched in 2013 in response to the main shortcoming of CPI, that it doesn’t include a measure of housing costs. It also calculates inflation mainly on the basis of the Jevons formula

RPI – this is the oldest measure of inflation; it is often referred to as the ‘all-items’ measure of inflation, since it aims to include a comprehensive list of areas of expenditure in its basket of goods and services; when it comes to calculating inflation it uses an equal combination of the Carli, Dutot and other formulas. The ONS continues to publish the RPI but has said it is no longer a ‘national statistic’, mainly because the ONS considers that the Carli formula leads it to overestimate inflation. 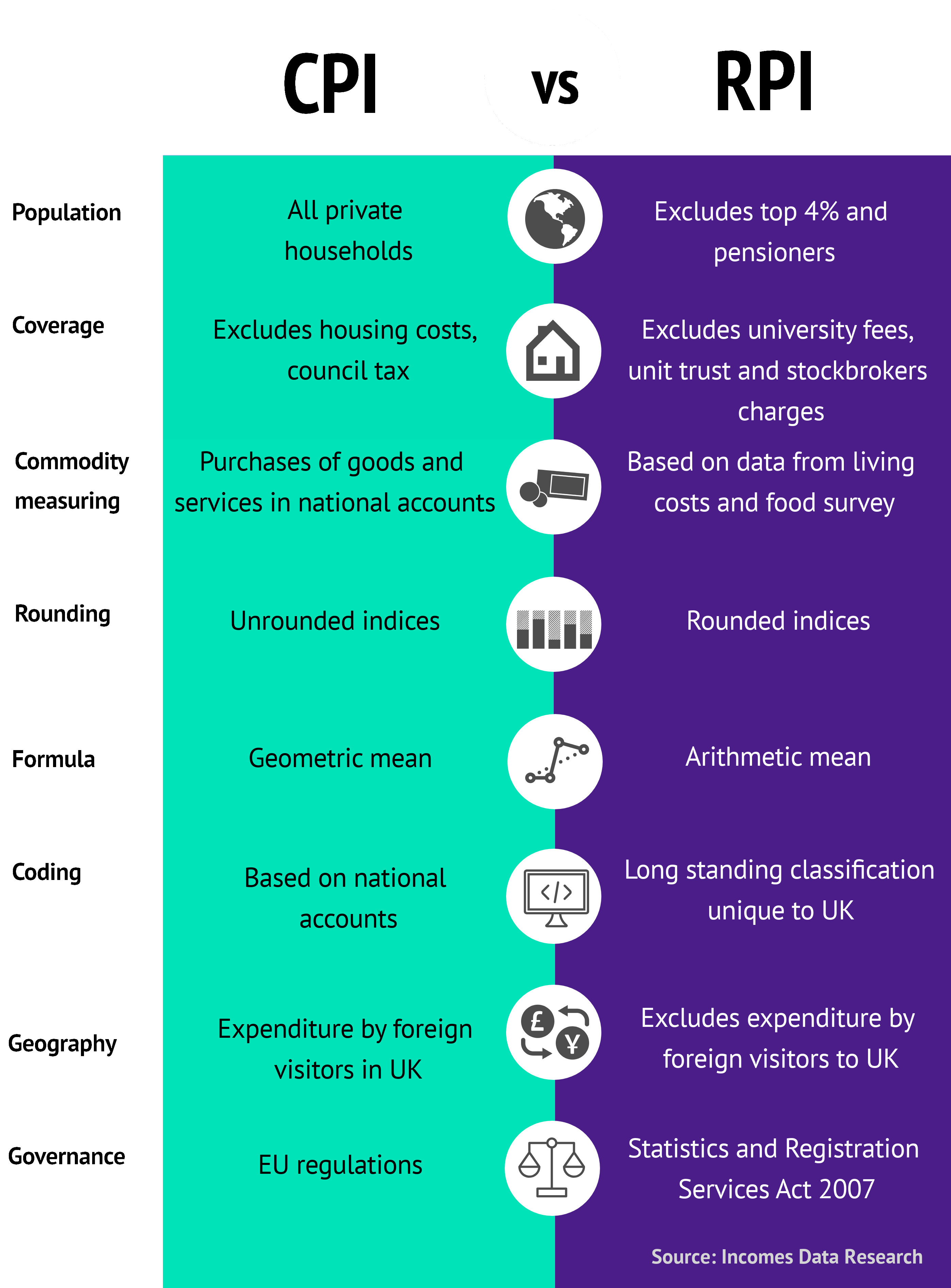 There is an ongoing debate among statisticians about which measure of inflation is the best for measuring changes in the costs faced by households. A large part of this debate hinges on the different mathematical formulas used in the different measures of inflation. The Jevons formula calculates a geometric mean while the Carli formula calculates a more traditional arithmetic mean. The principal difference between the two calculations is that under the geometric mean larger increases in prices of individual items are suppressed.

IDR reports on the CPIH, CPI and RPI measures of inflation as part of our service to pay practitioners. The fact that the CPI excludes housing costs means that its use in uprating pay and benefits can feel unfair. Statisticians have pointed out that the CPI and its variants, since they were designed for macroeconomic purposes, do not function as measures of inflation that are experienced by households. They have proposed the development of a Household Inflation Index, different in several respects from the CPI/CPIH, that would remedy this shortcoming. The ONS has responded to these developments by embarking on a programme of developing Household Costs Indices based on costs of different ‘typical’ households – retired households, non-retired households, households with children and households without children. As such, the indices are unlikely to soon replace the current statistics in public usage.

Because of the importance of inflation as an economic indicator, economists in various institutions regularly produce forecasts of the figures. City banks and firms involved in financial markets produce regular monthly forecasts, while less frequent predictions are produced by the Bank of England and the Office for Budgetary Responsibility (OBR), both quarterly. IDR regularly surveys a panel of institutions and reports their predictions to our customers.

For the second year running, CPI inflation has been indicated by organisations as the ‘most relevant’ measure with the RPI running just slightly behind. Some 49% of organisations described the CPI as the most relevant indicator of the cost of living, compared with 44% of respondents that favour the RPI measure. How can this be explained? The great recession of 2009 cast a long shadow. The CPI has become something of a boon to employers who, although they mostly have been prepared to raise wages, have sought to limit these increases to levels they regard as affordable. The fact that the CPI tends to be lower than the RPI, and its promotion by government, has undoubtedly helped in a period when considerations of affordability have been to the fore. In respect of the RPI’s continued use, the influence of trade unions over the pay setting process is clearly important. As employee representatives, trade unions are understandably keen to stress the ‘all-items’ nature of the measure.