The labour market for software development roles tightened somewhat in the wake of the coronavirus pandemic, as companies in many sectors increased their online activities. Demand for software developers is being driven by data analytics and machine learning/AI, as firms invest in technology to help improve business processes and gain better insights on their customers and performance.

The labour market backdrop has affected pay levels for such roles and this is borne out by official data on average earnings, from the Government’s Annual Survey of Hours and Earnings (ASHE), which indicates that the median annual pay for ‘programmers and software development professionals’ rose to £42,841 between April 2021 and April 2022. The mean or simple average increased to £46,884 over the same period.

The official occupational classifications are relatively broad, however, including as they do, lower-skilled roles like programmers, and this is likely to have affected the figures in ASHE. Our own data shows that the median basic rate for skilled software developers is currently £50,000, according to IDR Pay Benchmarker. This is the ‘national’ rate, for roles in organisations outside London. The data for the capital shows a premium of nearly 13% for these roles, with a median of £56,462. This premium is higher than the average premium for other roles in the capital, which is closer to 10%, and reflects the importance of software development in areas like finance, as well as the impact of ‘silicon roundabout’ and the market effect of the increased concentration of such roles in a relatively small area.

Pay levels also vary by sector, with the median in private services showing at £60,000, much higher than that for the public sector, which currently shows at only £40,322 (see chart). 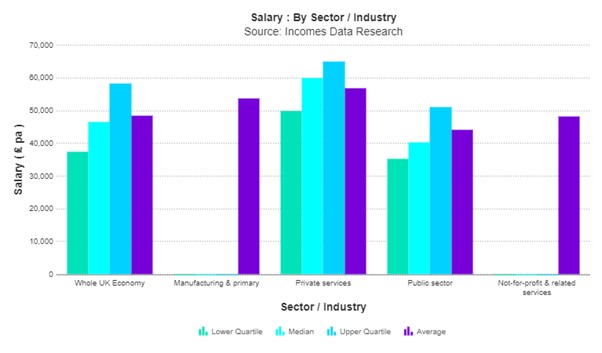 Analysis of market data by job level is an important way of distinguishing between different rankings of responsibility and skill. This is vital for obtaining like-for-like comparisons with pay for roles at other organisations. For example, a software developer with experience and qualifications who can provide advice and operate independently (and perhaps have some operational service management responsibility) would be classified as ‘Job Level 7’ in the IDR scheme. This is the job level for the median of £50,000 cited above. A less experienced software developer might be at a slightly lower level, for example Job Level 6, where work requires a vocational qualification and sufficient relevant specialist experience to be able to operate in a self-contained way. The median rate for such roles here is currently £35,360.

Back to our Insights

In this article in our series on pay for jobs in demand we look at salary levels for HR Business Partners (HRBPs). HRBPs have arguably faced the brunt of employee relations pressures arising from the Coronavirus pandemic, ranging from having to navigate the Government’s CJRS rules, in some cases having to implement planned reductions in staffing, and more recently dealing with an increase in demand for staff now that firms are recruiting once again.

The latest figures from the Office of National Statistics (ONS) show that job vacancies across the economy rose to a new record level of 1.2 million in the first three months of 2022, up from a low point of just 329,000 in April-June 2020. Filling these vacancies and onboarding new starters will require the involvement of qualified HR professionals and an important aspect of this will be making sure salaries for such roles are competitive. This means benchmarking pay levels at your firm against those in the wider market.

A salary check for Senior HRBPs indicates that the national rate, ie the rate outside London, is currently £50,000, according to IDR Pay Benchmarker. Analysis by region shows that salaries in London command a premium of around 10%. 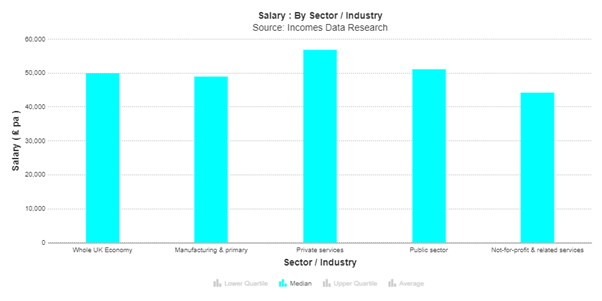 For reward practitioners, analysis of market data by job level is an important way of distinguishing between different rankings of responsibility and skill. This is vital for obtaining like-for-like comparisons of pay for the roles you employ with those elsewhere. For example, a HRBP with deep professional experience and qualifications, who is able to carry out a range of specialist activities which might include management of a team or services, would be classified as ‘Job Level 8’ in the IDR scheme. This is the level for the median of £50,000 cited above. A less experienced HRBP might be at a slightly lower level, for example Job Level 7. The median rate for such roles here is currently £45,000 across the whole UK economy. 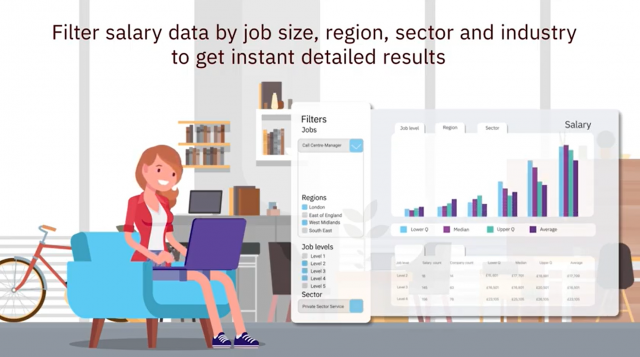